In this blog we are going to write about the so called 'Kowelenzer Originale' which can be translated as 'Koblenz originals'.
Koblenz, the city we study at has many interesting personalities to offer.
We will present you six of them who managed to stay in mind and who are being displayed in the form of statues all over the city. 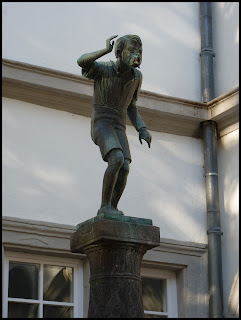 Probably the most famous of all these statues is 'dat Schängelsche' (nickname for any young boy) which does not actually represent a person who has once lived but is dedicated to a local writer.

The term 'Schängel' has its origin in the 1920's. Primarily, it was used to describe children from german women descended from french men. Back then, the most current names were 'Hans' or 'Johann', or 'Jean' in the french way. German people had troubles with pronouncing 'Jean', thus it ended up being called 'Schang'.
Once in a while, it was transformed to 'Schängel' which initially was considered as an insult. However, nowadays 'Schängel' is an honorific title and every man born in Koblenz is proudly engaged to call him- or herself a 'Schängel'. Frequently, they even add a belittlement and make it 'Schängelche'. 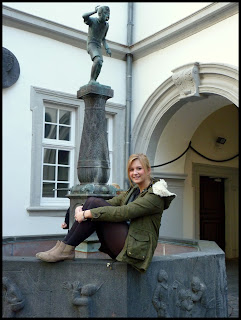 The famous Schängelfountain is dedicated to the poet Josef Cornelius (1794-1814). Obviously, this monument will always remind us of the Schängel's jokes and, of course, the vitality of Koblenz' townsmen.
Another popular reminder is the Koblenzer national anthem 'Dat Kowelenzer Schängelche'. Only to get an impression of it, we will show you a small part of it:

Annemarie Stein was her civil name. Her nickname ‘Pfefferminzje’ occurred because she sold peppermints for subsistence. Clearly, she had a sassy mouth as she set out to old pubs every evening in case to get her snifters and cigars, which she favored to smoke.
Moreover, it is rumored that at Christmastime she went gratefully to the crib at the ‘Liebfrauenchurch’ and thanked Jesus for all the snifters and cigars. Her gratitude was heard by the sexton who then answered with manipulated voice: ’Does it compulsively have to be hard liquor? Can’t it just be water?’ Thereupon the Pfefferminzje ranted and raved and abused the child in the crib: ‘What does a rugrat like you know about the needs of an old woman?’

Another aspect of her manner was that she danced and sang after her fictive role-model Queen of Saba. At carnival sessions she inspired with her poetry skill. The Pfefferminzje passed away last war. 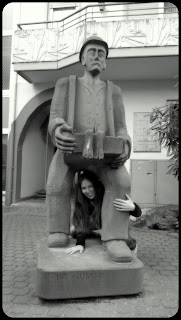 'Dä lange Gummi', his real name Peter Schneider, once was a hawker who walked from door to door trying to sell braces, laces and newspapers. His admittedly funny name comes from a certain diesease he suffered from; a form of neuropathy which affected his way of walking, causing strange looking movements of his limbs. People were reminded of caoutchouc and therefore named him 'the tall gum'. 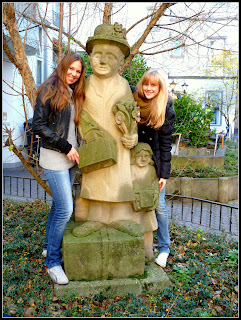 'Spitals Andun' became famous because of a certain habit/or even ritual he used to cultivate each year on his name day.

He would walk through the city with cardboard boxes and cigarette packs under his arms, his hat beautifully decorated with ribbons and flowers seizing the day. Everyone knew him and especially the young shoutet at him in acknoledgement so that his name day turned out to be a festive event. 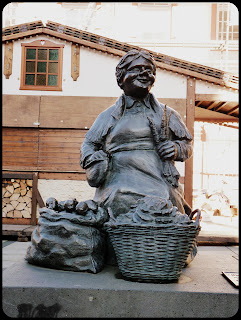 Mrs Ringelstein represents a typical market-woman; one of those who kept squatting at her stand all day hoping to sell her goods (mostly vegetables) but always managed to keep a smile on her face. Also she mothered the soldiers providing food and beverages.

...is seemingly the most popular original in Koblenz. 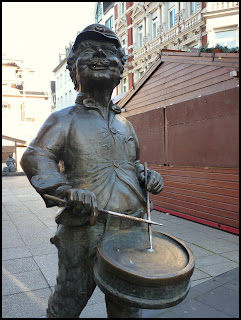 As the grandson of Blemersch Klär his profession was being a shoemaker. Henrys favorite trick was to alert the 8th battalion. According to this, as an ancient reel he pretended to tramp the general march through Koblenz whereupon every citizen assembled at the place of the plea. For such jokes his penalties were six weeks under strict arrest.

Whether producing boots with heels on the front for the prison wardens' daughter or ringing the master shoemaker out of bed in the middle of the night only to ascertain if he is wearing his cylinder even while sleeping, Henry was always the man for jokes. 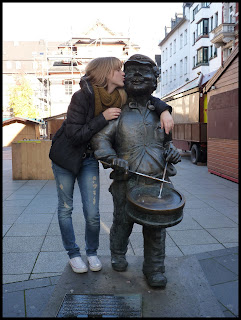 As there were lots of rumors about crispy Henry, the Lord mayor Lottner threatened him with workhouse in case he would not change his lifestyle. Obviously, his answer was of naughty nature : 'Herr Owerbergermeister, glawe Sie denn alles, watt su gefaselt wird? Von Inne hiert mer och su allerhand munkele ... Awer ich glawe su ebbes alles nett, von Inne nett.', which means ' Mister Lord mayor, do you really believe everything that is maundered? There are lots of rumors said about you too...but I do not believe in such stuff, not about you.'

Everytime we walk through the city and see those statues we get reminded of their impressing and funny stories. Koblenz can be glad to have them!